The presence of photographic debris in the frame

In the photograph, the “garbage” is the sky and the edge of the forest in the background.

Both of them do not support the idea of ​​the picture (forbs) at all, but they significantly distract attention. The only link that tries to mediate between heaven and earth is this high sagebrush, but it is not enough to justify the presence of the sky. I emphasize, the information-empty sky.
The right shot is free from unnecessary elements, and look how it played. The look feels quite comfortable in the frame, and is not going to leave it. This was achieved by filming the scene from a slightly higher angle and using tighter framing.
By the way: A cloudless or lightened sky is most often a “loophole” for the eye leaving the image. Clouds create a maze effect.

The main element of this image is a butterfly on a flower. However, in the left picture, the butterfly is not visible, due to the “garbage” in the form of unnecessary nettles and grass in the foreground. The right shot is rid of unnecessary vegetation, which makes the frame more expressive. However, in the background, some kind of out-of-rank bright stem still peeps through, diverting attention to itself. If desired, it can be removed using a graphical editor. So, the problem of “garbage” was solved by a different angle and tighter framing. 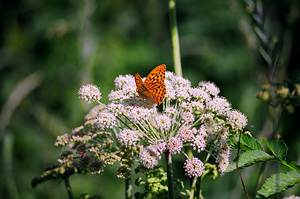 Let’s take a look at the left picture. Because of the symmetry, the top and bottom halves of the image are almost identical. Moreover, there is no difference between the left and right halves. It is easy to understand that here only 1/4 of the image works for information, and the remaining three quarters are “photographic garbage”.
Now let’s take a look at the picture on the right, taken from the same position. I not only managed to get rid of unnecessary repetitions, but also included in the frame “punctum” in the form of a dragonfly admiring the sunset. In this case, the idea of ​​the frame not only did not suffer, but was even enriched. And just something business – moved the camera diagonally to the lower left corner and slightly increased the focal length.
By the way: Getting rid of photo debris is often facilitated by blurring the background, achieved when shooting with a wide open aperture (for example, with an aperture value of less than 5.6). In this case, the blur divides all the light spots of the image into ranks, according to their pictorial importance.

Before that, we talked with you about “garbage-forming” objects that are easily accessible for understanding, about form. However, now let’s look at the concept of “photographic garbage” more broadly.

We know that the aesthetic meaning, the idea of ​​photography is embodied not only through form, but also through light and color. These three visual means are given to the photographer, just as the composer is given melody, rhythm and lyrics. 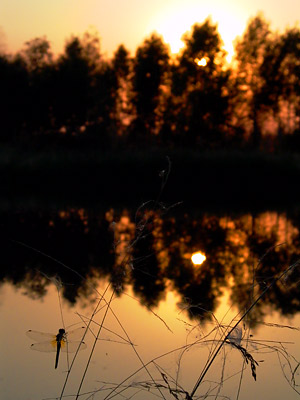 Having united, these components are not always harmoniously intertwined, embodying the same idea together. Sometimes the opposite happens – the form dictates one perception of the picture, the light another, and the color does not know why he is here at all, or why he was not invited. All this resembles a swan, cancer and pike. As a result of their joint efforts, the viewer is left at a loss and does not know where to look, what storyline to perceive. I will say again that herring and tangerines are good in their own way, but not in the same dish, if you are not a Chinese soul. Therefore, if pictorial means conflict, then one of them is photographic garbage. What to leave and develop, and what to suppress, depends on what exactly you want to say, to whom you want to say it, and on the degree of development of your taste. About the same as it happens when making soup.

In continuation of the topic, one could famously generalize and state that color in a photograph is able to suppress the influence of form, and light, on the contrary, is able to emphasize form, but constantly conflicts with color. However, this “rule” has so many exceptions that it makes such a generalization invalid. Let me just say that if the color does not play in time, then it is better to refuse to use it altogether.

We can say that there is no light in this picture, there is lighting. Therefore, color and form compete for the viewer’s attention. And what? Since the photo was taken on film with very high color saturation, the scene’s color temperature deviated from the nominal value resulting in an oversaturated cool blue tint. Therefore, it suppresses the form and occupies the entire attention of the viewer, being photographic garbage. Converting the image to grayscale mode in Adobe Photoshop brought back the accent to the depicted shape.

As you can see, the fight against photographic waste significantly reduces the amount of photographic waste. Of course, the absence of garbage in the photograph and the impeccable emphasis on the aesthetic idea is not at all enough to make a brilliant photograph. The secret of genius, rather, lies in the very idea of \u200b\u200bthe picture, however, if it is expressed indistinctly, then no one will understand what exactly you wanted to say.